No products in the cart.

Sign up today to get the latest news and deals on Mylec.com! 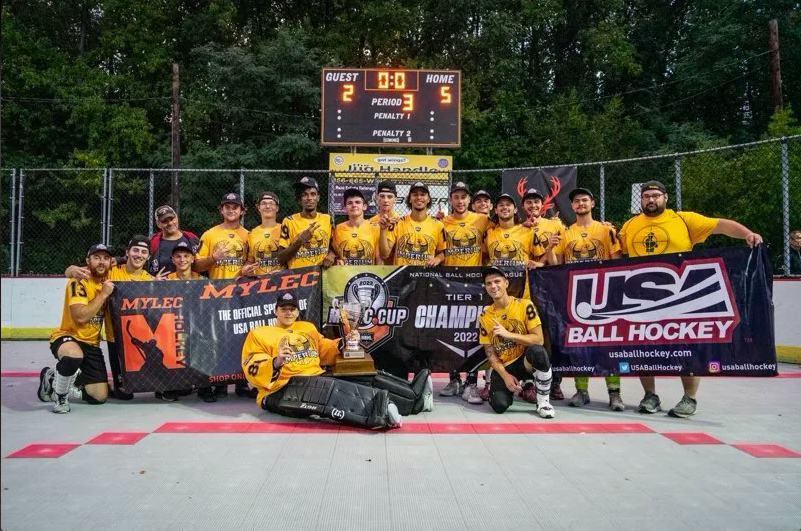 The National Ball Hockey League concludes its 2022 season with the Mylec Cup in Marlton, N.J.

When is it too early to say “dynasty”?

The Penn Hills Imperium won the Mylec Cup for the second straight year, defeating the Marlton Dawgz by a 5-2 score in the Tier 1 final. The Imperium allowed just two goals in three games on their road to winning the championship with Bryce Scanlon shutting out the Boston Blackhawks in the quarterfinal and the Bellmawr Hawks in the semi-final. Harrison Litzinger netted the game-winning goal for the Imperium and Anquan Smith and Danny Cunningham, who was named MVP, added two points apiece.

Played between Sept. 23-25 in Marlton, N.J. across three tiered men’s divisions and a women’s division, it is the second annual Mylec Cup for the National Ball Hockey League (NBHL), the first nationwide league of its kind featuring all amateur players. In just its second year of existence, the NBHL has grown rapidly in popularity, starting with 76 teams in its inaugural season and expanding to 151 this year.

Played on a “dek” surface, which are small plastic tiles pieced together to form a rink, and games are played 5-on-5 with rosters of 15-22 players with a 10-game regular season running from April to August. Playoffs are then played to determine the division winners and decide which teams can advance to the Mylec Cup. Three points are awarded for a win, two points for an overtime win, and one point for an overtime loss.

During the season, the Imperium went 5-2-1-2 (W-OTW-L-OTL) to finish second to the Steel City Show Stoppers in Pittsburgh Tier 1 while the Dawgz went 7-0-1-2 and also finished second in New Jersey Tier 1 to the Lakeland Caribou. Stephen Scian led the Dawgz in scoring with 10 goals and 17 points in nine games and Austin Avampato led the Imperium with 14 points in 10 games. Both teams went undefeated in the first two days of the Mylec Cup to earn their spot in the championship game.

The Dawgz controlled the play early in the final and came close to scoring the first goal several times but were continually stymied by Scanlon. An undisciplined high-sticking penalty for the Imperium handed the Dawgz an early chance to show off their power play featuring Jonny Ruiz, a former captain of UMass-Dartmouth’s Division III ice hockey team and also a veteran of the U.S. national men’s ball hockey team, but the man-advantage also bore no fruit. It was instead the Imperium’s Smith who opened the scoring with 3:24 left in the first period right after a successful penalty kill, picking off a Dawgz clearing attempt before sniping it five-hole past Tim Papagno from the high slot, establishing a lead the Imperium never relinquished.

Cunningham added an insurance goal 36 seconds into the second period, sneaking behind two Dawgz defenders to poke in a loose rebound for a 2-0 lead. Litzinger’s eventual game-winner came from in-close off a behind-the-net feed from Owen Mills with 4:55 remaining, and Cunningham added his second goal just 45 seconds later to give the Imperium a 4-0 lead.

Scian’s late goal in the second period pulled the Dawgz within three, but it wasn’t enough with the Imperium and Dawgz swapping third-period goals courtesy of Brendan Crousey and Denis Hickey, respectively.

“Once we got that [4-0 lead],” said Crousey in his post-game interview, “and they had to make that mountain, we knew it was going to be difficult. If we played our game, we would hang on, and we did.” Both Scanlon and Papagno made big saves, but the Imperium’s quickness and crips passing were able to exploit the Dawgz’s lackluster defensive zone coverage to earn their second straight Mylec Cup Tier 1 championship.

In the other tiers, the SouthCoast Chargers won the Tier 2 championship by a 2-1 score in a come-from-behind win thanks to John Pacheco’s overtime winner after trailing for nearly the entire game. Pacheco had been “Mr. Clutch” for the Chargers, also scoring in overtime against the Maryland Sparks in the quarterfinal.

The Queen City Crowns wrote a similar story in Tier 3, winning 2-1 after trailing for two periods before a pair of third-period goals from Brendan Florian and captain Josh Greco sealed the deal. It was a special crowning achievement for the Crowns, who were playing in their first big tournament and hail from Charlotte, N.C., and had previously played ball hockey on tennis courts. Their season was dedicated to JJ Damato, a founding member of Charlotte Street Hockey who died after collapsing during a pick-up game in 2020.

In the Women’s Tier, goalie Liz Conner stopped every single shot she faced for the Watatic Wild, and Alyssa L’Ecuyer scored just 1:02 into the game to help the Wild capture the inaugural women’s division title in a 1-0 win over the Steel City Snipes. It was the second 1-0 win against the Snipes for the stingy Wild in two days and conceded only five goals in five games at the Mylec Cup.

All championship games are available for viewing on Twitch.

RETURN TO MYLEC NEWS
SHOP MYLEC
WARNING: Products on this website may expose you to chemicals, including lead and phthalates or other chemicals which are known to the state of California to cause cancer, birth defects, or other reproductive harm, read more at: www.P65Warnings.ca.gov
This site uses cookies to provide you with a great user experience. By using our website you agree to our cookie policy.